Ever since I began posting these scam stories I’ve had friends and strangers alike reach out to me, asking me to contact potential scammers they’ve encountered. I’ll email these scammers on their behalf, but it usually ends after two or three short exchanges. For some reason, all the scams I’ve been able to drag out for months-on-end have come from Craigslist.

Recently, a friend of mine tipped me off to a scam which quickly fizzled out. I was left wanting more, so I headed to the scam cesspool Craigslist and began looking for criminals I could email in order to further entertaining myself.

Not two clicks into my Craigslist search I found this house for rent that made my scam-senses tingle: 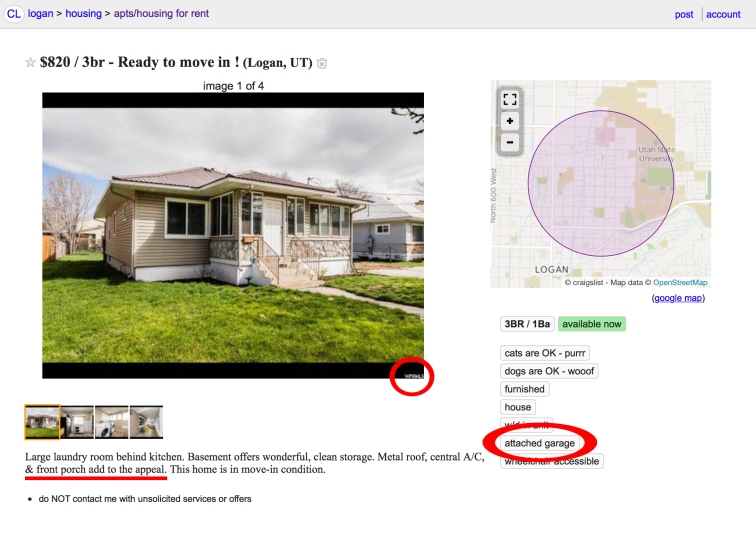 For starters; these photos were clearly watermarked and pulled from another site. Secondly, the house had no porch, yet the description said the front porch adds to the appeal. Lastly, the ad claimed the house had an attached garage, which clearly wasn’t the case.

It appeared to be a classic con-artist copy + paste job. I was fairly confident I had found a scam and was ready to email the ad poster, but first, I needed a new name and email address to contact them from (a lesson I learned during my first scam encounter).

I was sitting on my couch, eating a bag of Lay’s potato chips at the time and I did a quick Google search and found they were invented by a man named Herman. Chips invented by Herman; Chip Herman. The name had a ring to it. Now all I needed was a face for Chip. It was just then a commercial for ABC’s Modern Family came on the TV featuring actor Ed O’Neill and boom, suddenly Chip had a face.

I quickly created a hotmail account for my new alter-ego Chip Herman and sent the Craigslist ad poster an email:

The next day the suspected scam artist responded…

I knew within the first sentence I had a winner. Poor Darnell, it must be hard losing your job as a doctor after an envy snowstorm accident. I can’t imagine then having another doctor diagnose your inability to talk as the result of your body being in shock. I wonder if Darnell, being a doctor himself, agreed with the diagnosis? I guess it’s kind of hard to object when you can’t speak…

Something told me Darnell wouldn’t be able to help me here so I decided to skip all questions (that I did and didn’t understand) and just fill out his rental application.

How lucky was I to find a landlord who had lost their voice in a freak accident just like me?! At the time of my response, I was listening to a 90’s alternative playlist when Sublime’s April 26, 1992 came on. In this song Bradley Nowell talks about looting several stores during a riot, and brags about setting fire to a liquor store.

My previous scammer Jeffery Peters grew suspicious of me when I said I didn’t own a telephone so I gave Darnell a fake number that I had for a few days through an app on my phone. However, losing my voice to excessive smoke inhalation was the perfect excuse as to why I couldn’t talk on the phone.

Once again, I listed the Logan City Police Department as my current address because I knew Darnell wasn’t going to research it. I really hope he’s ok with my two bald eagles Justice and Freedom. I’m pretty sure private citizens aren’t allowed to keep these majestic animals in captivity but Darnell seems like an understanding man.

Luckily for me, Darnell and his family were ok with me living in his home with my bald eagles. 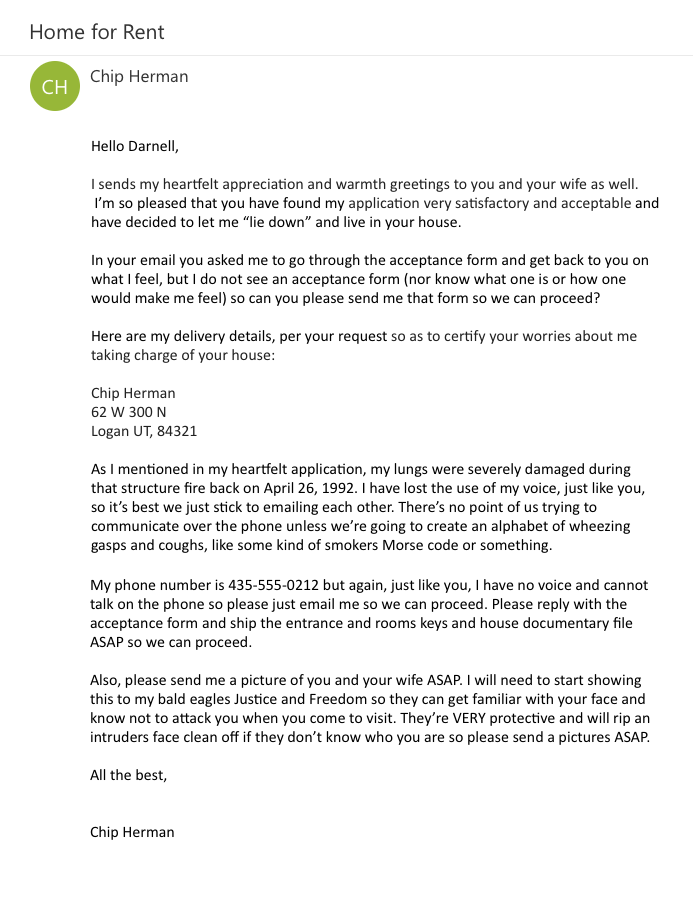 I wasn’t familiar with the acceptance form Darnell mentioned. Perhaps it was one of the questions I didn’t understand that I was supposed to ask… By this time my fake phone number had expired and I didn’t want to pay for the app to receive a new one so I gave Darnell a classic 555 number.

I was very excited to see that Darnell had the keys and documents ready to go. At least I think thats what the first picture was… It looks like it was taken the very first phone camera phone ever made.

I uploaded the picture Darnell sent me of him and his wife into a Google reverse image search and found that it actually belonged to Tom and Carol Sykes (just as the FedEx box they’re holding in the picture says). I went to their blog and learned that Tom is a self-taught artist and photographer. He is also the owner and co-founder of the Wisconsin Birding Network. How cool is that? Tom is the owner of a birding network and I am a potential tenant who owns two bald eagles. You just can’t make this stuff up.

You’d be surprised how fast you can write a 560-page book when writing is your only form of communication. Now all I needed was Darnell’s address so I could mail him a signed copy of the book and my rental deposit.

A few days went by and I hadn’t heard back from Darnell. Maybe things were a little busy at his permanent biomedical engineers job…

A few more days and still nothing, so I emailed Darnell again…

I wish we could Darnell, but NEITHER OF US CAN TALK.

I wasn’t too thrilled that I poured out my heart and soul to Darnell only to get a 4-word response with no punctuation…. 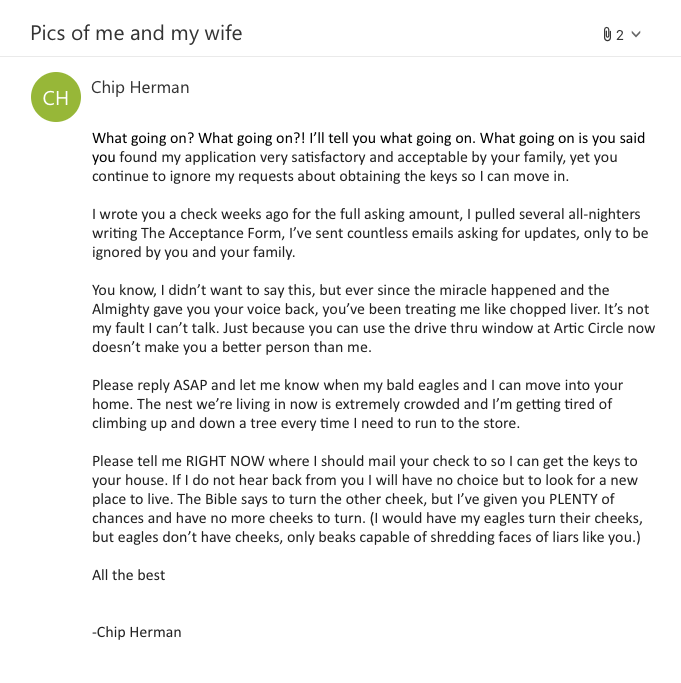 A few days went by and to no surprise, chatterbug Darnell didn’t answer so I emailed him again…

To my surprise, Darnell responded quickly.

He responded quickly… and thinks Chip Herman is a woman…

I don’t think Darnell appreciate me calling him an idiot with a Photoshopped iPad picture, because he didn’t respond. So I emailed him again…

Again, no response from Darnell… 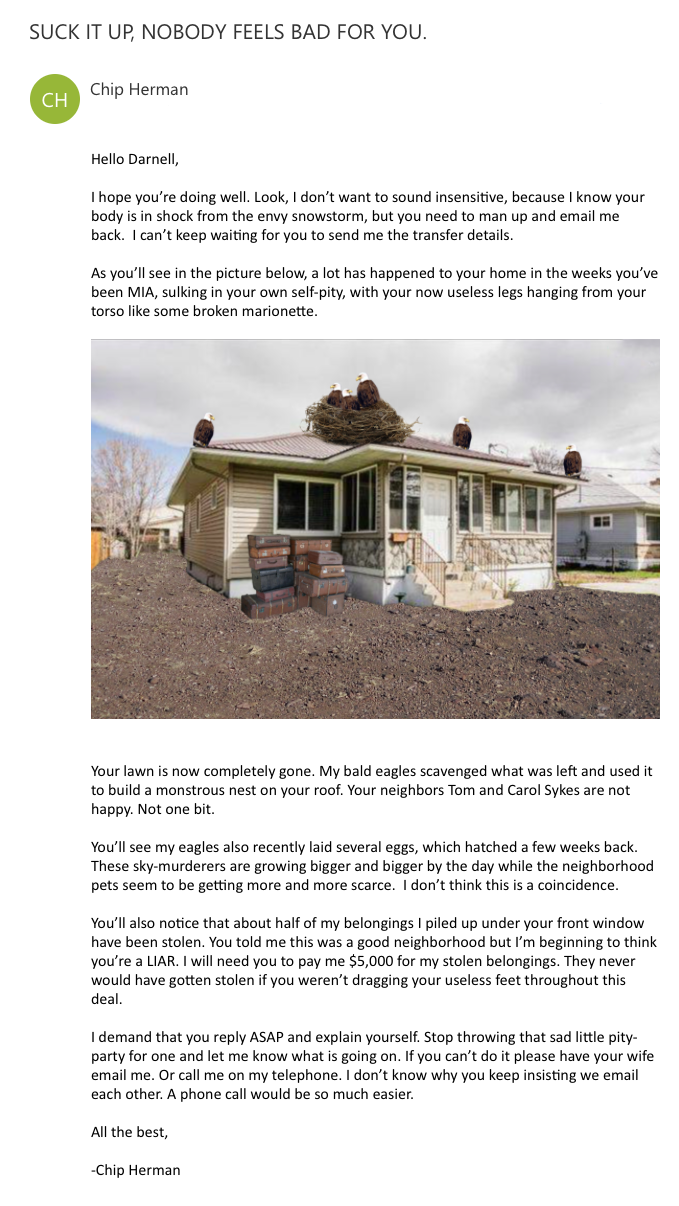 It didn’t look like Darnell was ever going to email me back, or call me for that matter.

I thought I’d reach out to Darnell ONE last time, before sending him the customized farewell email each scammer receives.

At this point it was obvious that Darnell wasn’t going to email me back so I figured it was time to let him know I was no longer interested in renting his property. 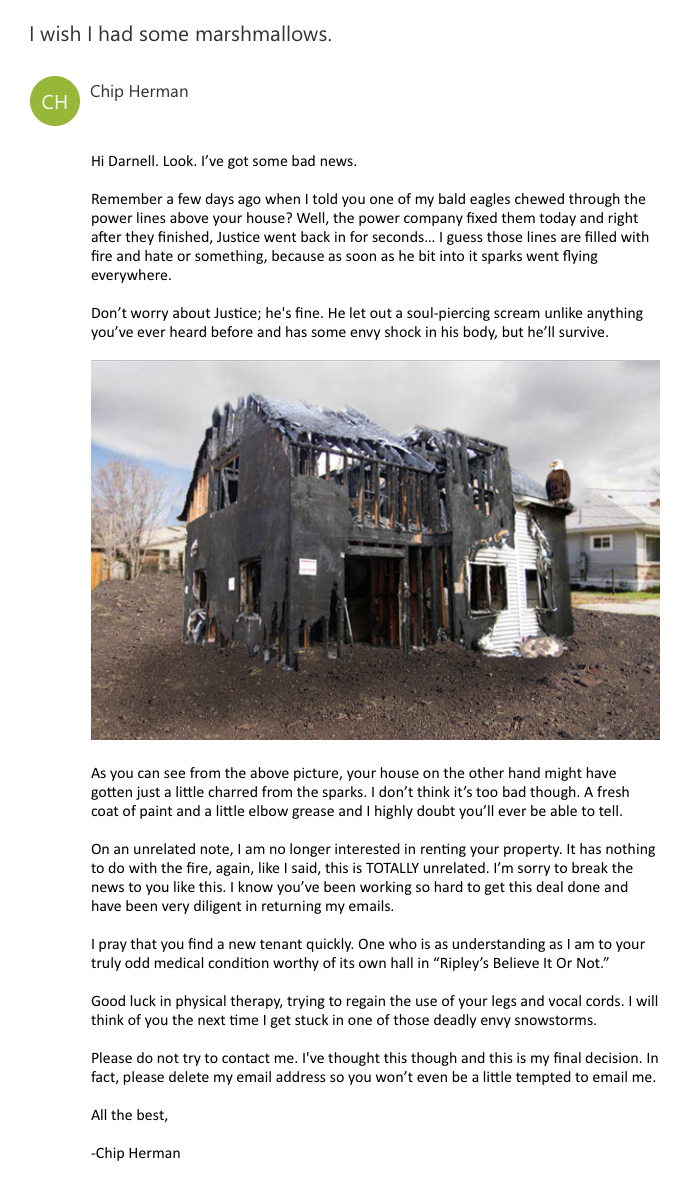 After my exchange with Darnell finished I pulled his IP address from and one of his emails and plugged it into a free IP address tracker (http://whatismyipaddress.com). I found his emails came from (or were being redirected through) Wayne, Pennsylvania and to no surprise, there was a LONG list of comments saying the IP address was a known scammer. Sadly, there were several who had actually fallen for Darnell’s shenanigans and lost money.

I’ve said it at the end of my first three scam encounters and I’ll say it again; IF YOU FIND A DEAL ONLINE AND SOMETHING FEELS A LITTLE OFF OR IT SEEMS TOO GOOD TO BE TRUE IT PROBABLY IS. Please be smart when dealing with money & strangers on the Internet.

IN CONCLUSION:
I’ll never know for certain what became of Darnell Betts. Maybe he gave up scamming and went back to making an honest living as a Biomedical Engineer in Mississippi. Maybe he finally succumbed to the lingering side-effects from that fateful envy snowstorm. It will always be a mystery. More mysterious than the coldest winters envy snowstorm. 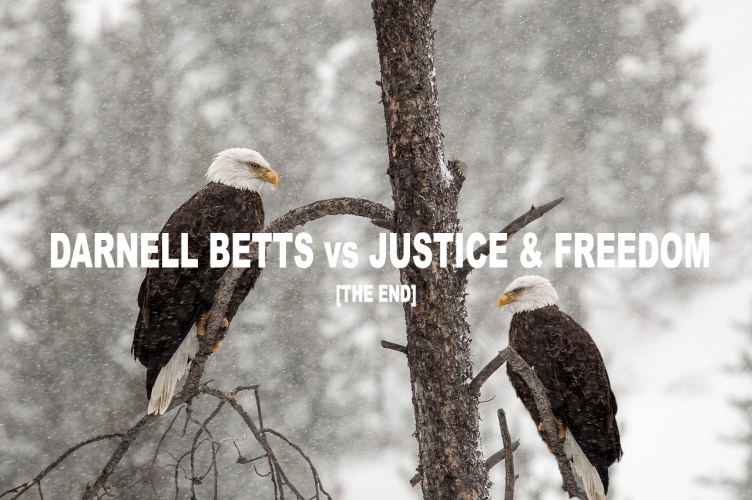 DON’T WANT TO MISS OUT ON FUTURE SCAM STORIES?